“Reef, mangrove city. Set in mangrove mud.” The words wrap up one of the songs by Chico Science and Nação Zumbi, criticizing societal problems and raising the self -esteem of the people of Pernambuco through the Manguebeat movement in the 1990s.

The term was born inspired by the typical coastal ecosystem of the Brazilian Northeast and is directly linked to local football due to a stadium: Retirement Island.

Retiro Island floods the 1975 floods in Recife, a period of heavy rainfall in the capital – Photo: Diario de Pernambuco / Arquivo

Inaugurated in 1937, the island became the epitome of ridicule due to the accumulation of flooded grasslands and was once again barred from hosting games – this May – after heavy rains caused the biggest tragedy in man of the 21st century in Greater Recife. Stadium problems, however, have a reason to exist.

The story began even before state football arrived. In the 1800s, Ilha do Retiro was still an island – surrounded by river waters. It is close to the same, such as Ilha do Suassuna, Ilha do Maruim and Ilha de Anna Bizerra. But they all lost this distinction during the urbanization process in Recife.

“It’s a mangrove area and it’s all gone for urban construction.”

Map of the area where Ilha do Retiro was built, but in 1875, before football in Recife – Photo: Arquivo / Plan da Cidade do Recife and its Arrebaldes

Thus, the stadium on Ilha do Retiro, built on top of the mangrove embankment of Recife – to Manguetown, as sung by Chico Science. At this point, there is a first problem with the stadium, according to experts: the ground.

The entire area of ​​Avenida Agamenon Magalhães is composed of mangroves and tidal channels. But the Island is on the plain of the Capibaribe River. It is a land infested with mangroves.

-explains the doctor of geography, also from UFPE, Daniel Lima.

Ilha do Retiro can be seen from the club entrance, with the Capibaribe River in the background, behind the buildings – Photo: Sport Club do Recife / Publicity

The location of the stadium, therefore, hastened flooding – really because of the condition of the land and also the proximity to the sea and the Capibaribe River. It is a type of soil that has a high content of mud and therefore can accumulate a lot of water.

– It is a fine material with clay and silt (rock fragments). The soil is soaked in rains and there is no possibility of water entering, because the soil is naturally soggy. – completed Osvaldo Girão. 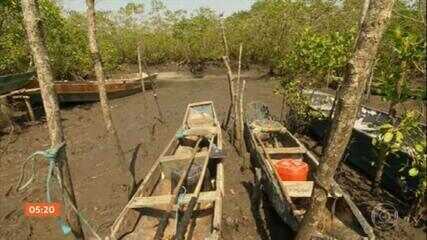 Understand the importance of restinga and mangroves in biodiversity

It is no coincidence that Ilha do Retiro was submerged in part during the 1975 floods. – famous for leaving 80% of Recife’s habitable terrain underwater. At the time, the stadium had just reopened after spending a year and six months closed for repairs. It ended up flooding the field and the dressing rooms.

All three stages were affected. But the Island is worse. You never know where the river, Island and the road are.

Since then, the impact of rain on the stadium has diminished, including. But this was largely due to the construction of dams on the Capibaribe River, which the state implemented after the 1975 floods.

In addition to the Capibaribe dams, the Sport has also undergone changes field drainage system over the years. And the scale appears to be accurate as the second most important factor in the state of the Island’s grasslands. Mainly because the water had to be drained, but usually at this time there was nowhere to go.

– The soil becomes saturated, can no longer penetrate and the water will remain on the surface. Sometimes the technology itself, no matter how good it is, is not enough. – according to Osvaldo Girao.

Sport has plans to overhaul the stadium’s drainage system and run within the club’s financial limits. However, the scale is likely to reduce events – according to geographer Daniel Lima.

This is a problem that Sport cannot solve in the medium term. It might be better at first. But the probability is flooding, because the soil is soggy. They seem to need a place to put all the water.

Even amid heavy rain last week, stadiums like Arruda, Aflitos and Arena de Pernambuco did not show similar problems. The three cases, however, were accompanied by different causes.

– You won’t see it as usual in Náutico and Santa Cruz because the geographical location of the stadiums is better, further away from the river – according to Daniel Lima. 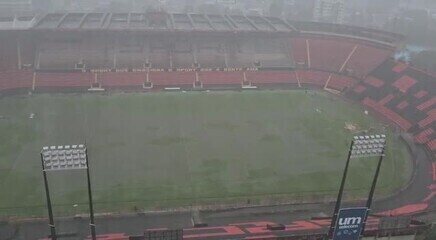 Last week, Ilha do Retiro seemed to be completely flooded after the rain in Recife

Afterwards, Osvaldo Girão added that Arruda – despite its proximity to the region’s canal – was built of a taller structure. While the Arena de Pernambuco, in turn, has facilities for the latest construction.

– Arruda has a taller structure. The channel passes through Vasco da Gama, Arruda, but the stadium itself is built on a higher level. The Arena is close to the venues, but has a different structure and probably a larger base – he said.

At the end of the day, the stadiums come with structural – and environmental – differences, which are historic in football. They have become part of Pernambuco’s imagination and the birth of their own fans.

in Sport, a Retirement Island that is no longer an Island. But it still embraces Recife, the mangrove city. Placed in mangrove mud.