Corinthians football director Roberto de Andrade said right-back Rafael Ramos went to the Internacional’s locker room after the game between the teams on Saturday night, in Beira-Rio, speaking to Edenilson and denied having committed a racist offense against the steering wheel.

In the 30th minute of the second half, after arguing with the ball, Edenilson told the referee that Rafael Ramos called him a monkey.

– We accompanied Rafael to Inter’s dressing room. He spoke to Edenílson, explaining to him that he was probably misunderstood. He said something else. You let me, too, was in the middle of escaping … He said: “Bro, fuck”. Another thing he understood. He apologizes if he understands otherwise, which is not his way. The baby is fine, we assure him he is. Same with Edenílson. We are not here to say that one is lying or the other. Sometimes he would speak loudly, with a Portuguese accent, something else he probably understood. They talked and apparently everything was resolved. He understood differently, so this whole truth happened. He apologized. If he understands otherwise, forgive him. He did not say what Edenílson accused. Now it is in their consciousness what to do – said Roberto de Andrade, director of football at Corinthians.

Shortly after Edenilson made the accusation, the Corinthians players spoke to the side, who denied the action. Leaving the field, none of those involved in the case wanted to speak. Striker Jô gave an interview and stated that his teammate claimed to have said another word, with a similar tone.

Vítor Pereira, coach of the Corinthians, spoke about the matter at a press conference:

– I believe in people. I believed Rafael and what he told me. From what I know, from Rafael’s upbringing, I think it’s almost impossible for him to behave like Edenílson said. I talked to Edenílson, I think he understood the way he understood. I have already experienced this. Portuguese and Brazilian are not the same languages. We say things you don’t understand, and the same thing you do in Portuguese. I made this effort to speak more Brazilian, which is not the same thing. I’m not saying who’s right. I believe in both. I don’t know Edenílson, but I believe he was honest, but maybe he was misunderstood. I knew Rafael better, and I had never seen him before, he was an educated man, with years and years of career. I don’t know if they’ve already said what Rafael said. So I can’t go back, I don’t want to say bad words, I’ve said enough in the field. They were already talking. One says one thing he says, one says he understands the other, so … I believe both, but I believe in a misinterpretation of Edenílson.

Members of the Rio Grande do Sul Civil Police are now in Beira-Rio to listen to the parties involved in the case. 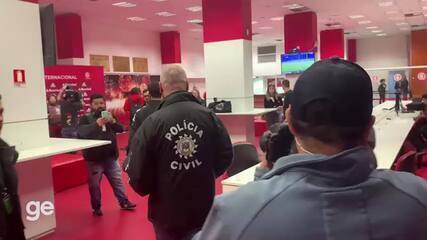 Internacional declared itself through an official note. See it below:

“Once again, a bad case of racism has been recorded in national football. This time, in our house, against a player from International. In this Saturday’s match (05/14), for the Brazilian Championship, Edenilson reportedly suffered racial ridicule from Rafael Ramos, the athlete of Corinthians.

It is unacceptable that realities of this type will still occur in 2022, there is no room for racism in our society. The People’s Club reiterates that it rejects any act of discrimination and supports its athletes. “

The ge Corinthians podcast is available on the following platforms: