Destroyer of Invincibility, the Botafogo re -emerged in the underdog position to eliminate a favorite. In the middle of Beira Rio, Glorioso came out in the back, played a player a bit from the first few minutes and returned a two-goal deficit to build a historic comeback. The big win was due to the excellent use of set pieces and the team’s tactical commitment to compensate for the low numbers. Joel Carli also attracted attention for his leadership and his unparalleled performance on the air.

The win and good performance in the game against São Paulo showed new possibilities for Luís Castro to assemble the team. From a collective point of view, the system with three defenders, which at the defensive stage consists of five lines of wings, reduces spaces for the opponent and improves area defense. Individually, discredited players like Patrick de Paula and Lucas Piazon have regained the coach’s confidence in their good performances and returned to the useful side of Alvinegro’s still limited team.

For the Internacional confrontation, unbeaten in 14 games under Mano Menezes, Castro kept the system of the game and the team changed little. Both changes were caused by the automatic suspension of defenders Kanu and Victor Cuesta. Philipe Sampaio returned to the team after a right knee injury and Klaus made his first start as a starter. The defender only played 45 minutes in the first leg against Ceilândia for the Copa do Brasil.

Botafogo entered the field to implement the same plan as last Thursday. A 5-2-3 during the defense that forced three players forward and occupied the center lane with two defensive midfielders having the physical strength to force the opponent to play for the innings. If attacked from the side, the winger moves away from the line of five to fight the player in the sector and the defense is organized into a line of four. The proper functioning of this defense system depends on defenders having little movement to cover the wings. The presence of Philipe Sampaio and Klaus in this role could cause uncertainty during the game.

This could be, because, after two minutes, a controversial interpretation by the referee damaged Botafogo and changed the entire course of the game. Referee Sávio Pereira Sampaio, with VAR intervention, scored a penalty and dismissed Philipe Sampaio for allegedly touching the defender’s arm. Aside from the controversy, Inter’s attack was born out of Hugo’s rise to put pressure and the defense’s delay in reorganizing itself into a line of four. With uncoordinated movement, Edenílson had plenty of space behind the sidelines to receive the ball and advance towards the spot.

The sense of injustice caused by the dismissal and the scoring of the maximum penalty created panic among the players and the coaching staff, shaking the team’s emotions on the field. Luís Castro was sent off over the complaint, leaving the team under the command of assistant Vítor Severino on the sidelines. After the penalty, taken and converted for eight minutes – almost a six -minute stoppage -, Internacional stepped up and quickly joined in a shocked Botafogo. Alan Patrick has a lot of space to be made and Edenílson’s vertical movement confuses the white-and-white mark.

At 13, Colorado expanded the lead. With one player small, Glorioso organized themselves into a 4-4-1, with Vinícius Lopes and Lucas Piazon having bigger defensive responsibilities, closing out the second line on the sides. . When the opponent again attacked the left side of the white-and-white defense, Kayque missed the boat and was abandoned. Patrick and Piazon did not cover the space created by the movement of the steering wheel causing the entrance to the area to flash. Both Bustos and Alan Patrick scored and the side scored second for the gauchos.

With 2 to 0 on the scoreboard and one more player in the first minutes of the game, the game seemed to be in the hands of the home team. Cornered, Botafogo finds an exit alternative to reach the attack: the launch seeks Erison in the confrontation of the opposing defense. Of the 18 shots fired in the first half, seven were successful (four of them from Gatito’s feet). In 18 minutes, after a free kick in the colored area, the ball was left to Vinícius Lopes to reduce the injury. Dead balls became the basic weapon for Alvinegro to create goal situations. At 47, in an uphill in the area, Vinícius had another chance to score and tie the fight, but he missed and missed a clear opportunity. 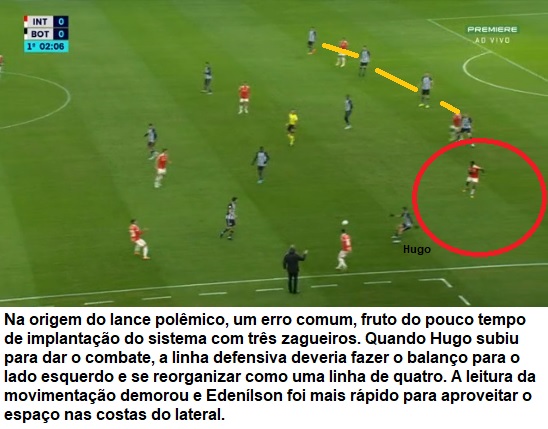 Botafogo finished the first half with 32% possession of the ball and only 68 correct passes (81% accuracy), a photo of the team’s difficulty in escaping the high pressure of scoring the opponent. The team kept the game alive through defensive reorganization that was able to execute after calming down and maintaining the required level of concentration. The use of set pieces, one of the team’s strengths, almost allowed Glorioso to get an impossible draw until halftime.

With no return changes for the second period, Botafogo came back with lines of four even tighter, with Erison well separated in the first fight. Defensive positioning has been able to effectively limit Internacional’s offensive production, which is almost unfinished. When asked, Catito showed up well to avoid the worst. On the other hand, the high level of defensive commitment required from Vinícius and Piazon left the team with little energy for attacks.

This scenario was amplified by Botafogo’s treatment goal in the 13th minute. Again with a dead ball, a corner kick, the ball traveled to the Inter area and only white heads were found. Carli turned away and ‘Toro’ Erison finished. It was the striker’s sixth goal in 11 games in Brasileirão. It is important, however, to praise the work of Captain Joel Carli. Holding the second consecutive game, the defender is the wall of the air game. The 13 hits and the 100% use of arguments for the top show the Argentine’s importance in defending the alvinegra area. On attack, he still managed two goal situations from headbutts.

Botafogo’s first substitution occurred only in the 41st minute of the second half, due to the lack of bench options and the team’s good tactical execution in the final half of the game. Daniel Borges replaced Vinícius Lopes. Matheus Nascimento, passed on selection for a physical game played by Erison, arrived on the field at the age of 44. 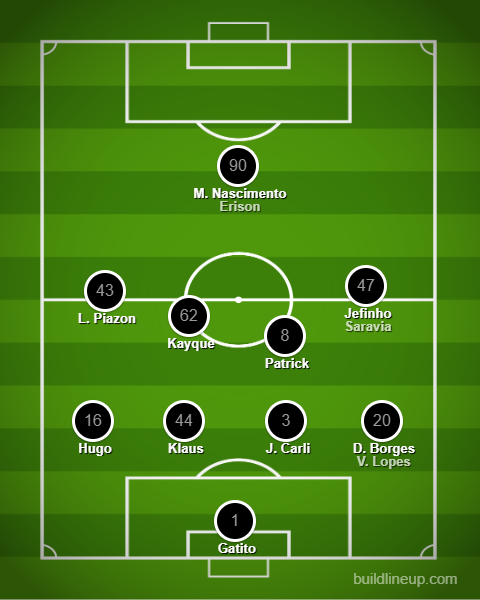 Despite being a small player and the team focused on not conceding additional goals to the opponent, guaranteeing a draw that could already be heroic, Glorioso was also able to escape to try a third. As the Internacional attack continued, spaces appeared for white-and-white attacks. The unique winning goal came in the 55th minute, in a counterattack pulled and ended by Hugo, with an emphasis on determination and Kayque’s insistence to follow the game to the end.

In search of a third straight win, Botafogo received Fluminense at Nilton Santos, next Sunday (26), at 16h.